Trekking is the best way to discover hidden treasures of Cappadocia.It’s unique formations,volcanic valleys and unspoiled local life make Cappadocia one the most popular trekking destinations of Turkey.

This is a centre-based hike,follows volcanic valleys,orchards and enchanting formations of Cappadocia.The itinerary is richly decorated with sightseeings as well as optional activities such as culinary lessons,cave camping and hot air baloon ride.Trekking in Cappadocia will definetly fulfill your holidays desires.

Uchisar Castle:
Enjoy the view from the highest ”rock cut” citadel of the region 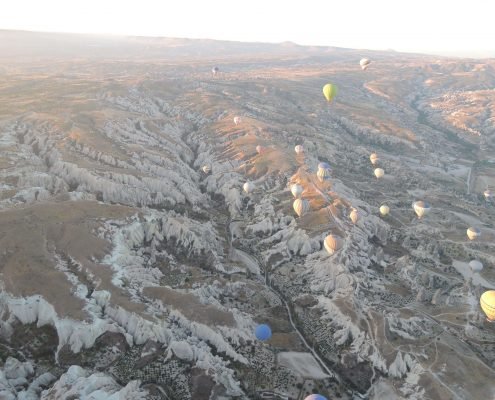 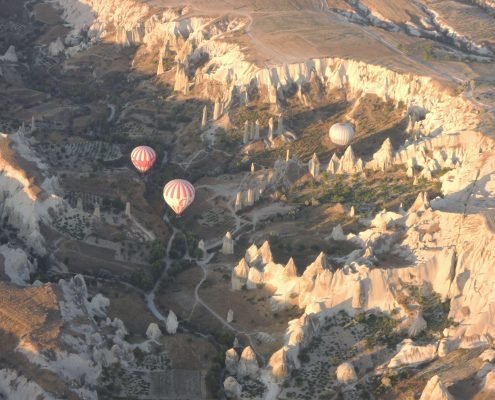 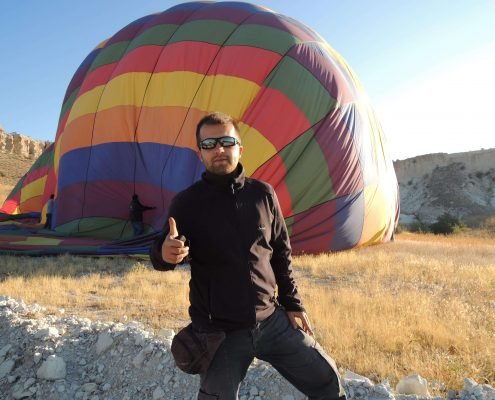 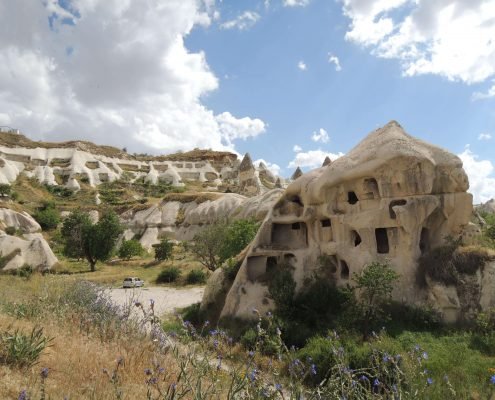 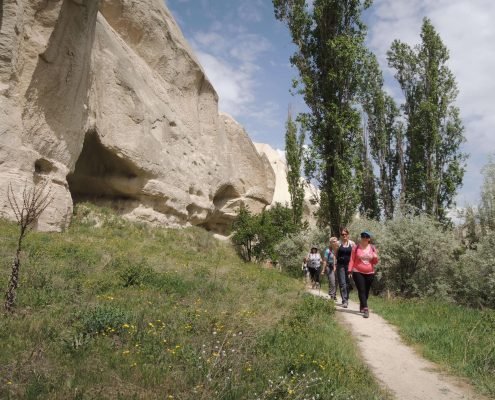 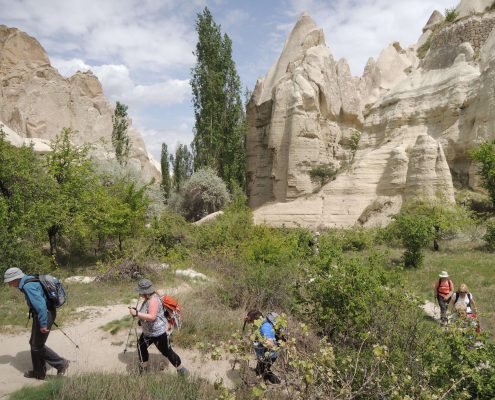 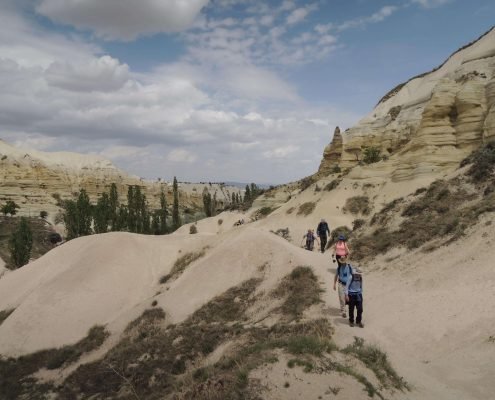 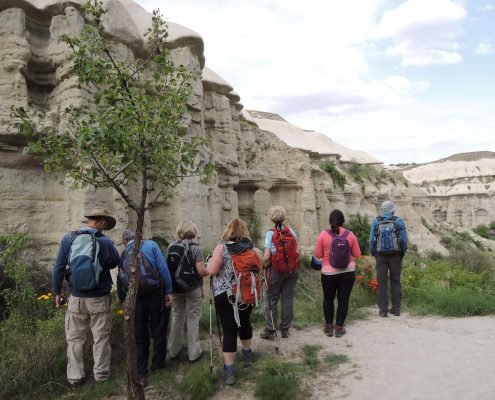 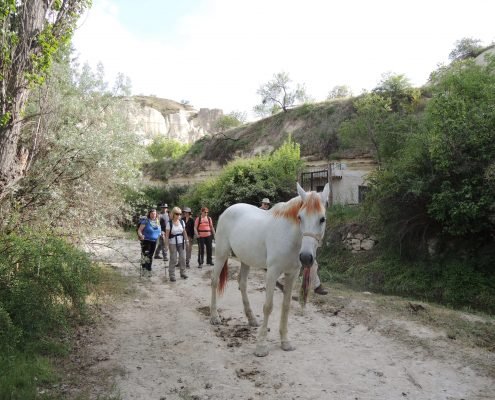 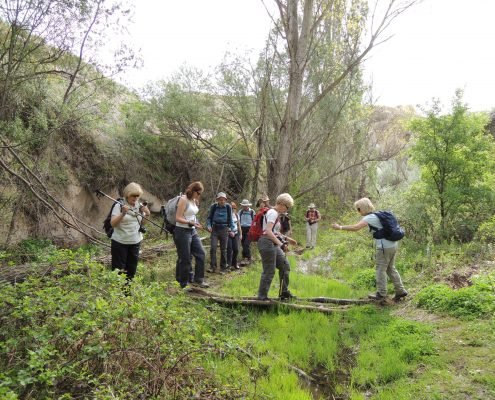 You meet our guide an driver at Kayseri airport and drive to hotel in Göreme.

We have a short transfer to white valley.Route take us to Uchisar castle through the monolith rock formations.Due to this mushroom shaped formations on the slopes the valley is also called ‘Love valley’.We ascend to Uchisar town.We have lunch in a local restaurant then visit the castle.It is a naturally formed rock structure with full of caves used as dwellings,storages and stalls.As it is the highest spot of central Cappadocia,It was always a strategic point during war times.We walk up to the top of the castle.Then we continue our walk through Pigeon valley.The valley accomodates a big number of pigeon houses.Pigeon’s guanos were used to fertilise the fields by locals.As they contain 15 percent nitrogen,they were nutritionally beneficial for dry soils like Cappadocia.There are thousands of lofts carved out of rock faces around the region.We descend to Göreme town.You can have invigorating Turkish bath ‘Hamam’ before we head back to the hotel.

In the morning we have a short drive to Pancarlık Valley. We start to hike from the remnants of a monastery.The route meanders along the stream and pass through the green fields.The valley is surrounded by high rock structures and caves which are used as dwellings,storages and graves by the locals.We follow the path crossing the stream several times to a ridge where we admire the extensive dove cotes. the end of the valley we ascend on a dirt road to Ortahisar town.We have lunch at the local pide restaurant.Then we drive to Göreme open air museum. Here,we see the best preserved churches of the region.Cappadocia was inhabited by early christians in the 4th century from Caesera(Kayseri).They formed a Monastic life which was flourished and expanded in the 7th century.Monasteries,chapels and cathedrals were carved in to the rocks.Göreme open air museum hosts the best of them that dates back to 11.-12. century AD.These rock-cut shrines are richly painted with ochre and other herbal dyes which reflects early Christian renaissance.Then we return to hotel.Before dinner we have a cookery lesson in a village house in the town.This is a great chance to experience Turkish local culture and learn more about food,spices and desserts.

”Optional hot air balloon ride.Cappadocia is one of the best hot air balloon ride spots in the world.Early in the morning dozens of balloons take off and form a stunning skyline in the region.As it is the best way to witness the picturesque formations entirely,it has become the most popular activity and highlight of the region”

In the morning we start with a short photo break.The spot has a tremendous view overlooking Göreme town and formations with the volcano at the background.Then we drive to Kaymaklı Underground city.Underground cities are one of the top highlights of Cappadocia.They were the living quarters and shelters of the locals during war times throughout the history.Although the first inhabitants are thought to be Hittites,most of them were reformed and enlarged by christian communities against Arab-Sasanids raids.With long passages,labyrinth tunnels,chapels,vineries and a big number of storages,they are more like  subterranean villages with the capacity of thousands.Kaymaklı underground city is one of the largest in the region consisting of 4 floors open to public.It was listed as a World Heritage site in 1985.We continue on to Ihlara valley.The gorge streches 14 kms from Ihlara to Selime town.It was formed by Melendiz River which still flows helping cultivation of the area.The gorge also provided an ideal place for early christian monks.There are caves,churches and storages as well as safe hideaway tunnels on both side of the river.We walk along the river seeing rock-cut churches and fields en route.After having lunch in one of the authentic restourants by the river we continue on our walk towards Selime Monastery.It is situated on a hill top overlooking Selime town.Monastery is a 9th century religious complex consisting of a cathedral,chapel,education hall,dormitory and kitchen.There are still some wall paintings can be seen in the churches.We ascend to the top fallowing a steep path and stroll around rock dwellings enjoying the scenery.Then we return to hotel.

Today we start our walk from a panaromic view point of Göreme.We follow the route on a dirt road to Zemi valley.Then we take a path through the orchards and naturally formed tunnels then it ascends to hill top.We meet our bus and have a short drive to Red valley.We have lunch in the valley in one of the coolest restourants of Cappadocia.Then we have an undulating walk in the afternoon over the ridges of Red and Rose valleys.Due to its dominant red color and alien landscape,red valley is one of the most dramatic part of the region.We explore the most hidden chapels and caves en route to the camping spot.Our camping base is surrounded by rock-cut churches and dwellings in which we can stay.We enjoy BBQ at night under the stars.If you wake up early you will admire the sunrise colors with dozens of baloons in the air.

Today’s walk starts from the camp site.We ascend to Mt Bozdağ.(1350m)It is one of the table mountains of the region.Dominating the skyline it offers you a stunning bird-eye view of Cappadocia.We may see Egyptian Vulture along the walk.Then we dip down to Paşabağı.Due to a big number of rock-cut chapels inhabited by hermits,It is also known as monks valley.St Simeons life style was adopted here.This secluded settlements went on until St Basil brought communion in the 4th century AD.We stroll around unique three headed fairy chimneys then drive to Zelve open air museum.We have lunch here and visit 13th century monastic settlements scattered around 3 valleys.We continue on to Avanos.It is divided by Red river which is the longest river of the country.With the old mansions and charming river side,it is one of the most characteristic town of Cappadocia. Beside tourism and agriculture,pottery making has been dominating the economy of the town for 4000 years.There,we have a chance visit one of the workshops and experience pottery making there.Return to hotel.

After dinner we have a chance to see Whriling Dervishes,(an active meditation of Sufi dervishes of Mevlevi order) or Turkish Night where you can experience the variety of regional folk dances.

We have a short drive to Damsa lake.(30mins)Today’s route takes us through the vineyards and ruins of Golgoli to Ayvalı village.We have picnic lunch in a local cafe in Ayvalı then continue on to Mustafapaşa. Mustafapaşa ,also known as Sinasos was  a prosperous town of  Greek merchants untill 1924.After the population exchange between Turkey and Greece, it was abondoned and partly reinhabited by Turkish families from  Macedonia.We see some of the elaborate mansions and houses that witnessed the days of glory and an Ottoman Medrasah which is a modern college today.Return to hotel.

We drive to Kayseri airport.

Four seasons.Best in June and September.